Okay.  This pen is not going up for sale.  No way, no how.  I've fallen head over heels in love with it.

I have no idea what kind of pen it is, just that it's a second tier (not the absolute best, but definitely not the cheapest there is), going by the silver-palladium alloy nib--the middle ground between a very nice gold nib and the cheap, sorta scratchy stainless steel nibs, like what my Parker pens* came with.

My pen has a very fine nib that has a little bit of flex to it, not as much as some of the reports I've read of the 14 kt gold nibs that are made to flex, but much more than the pretty Noodler's pen that Odysseus got me for my birthday--handy for getting it started when it doesn't want to write immediately.  It's fine enough that it hasn't bled through or feathered on paper that every other one of my pens does that with, in a color of ink that always bleeds through (Parker Quink Black). 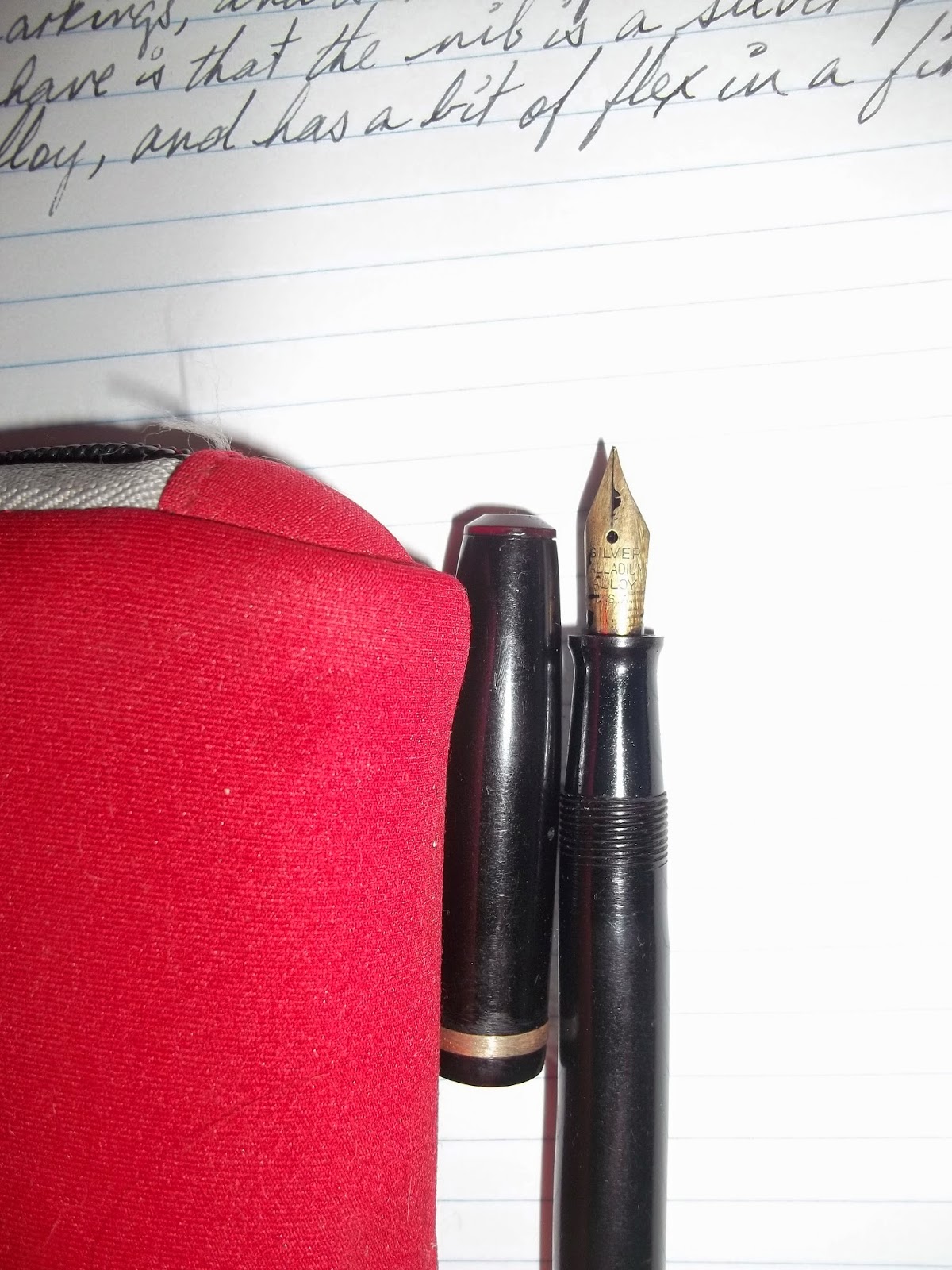 No, the pen isn't really that pretty--some of my cheap, Jinhao pens are a lot prettier--and it's got a lot of wear marks under where the clip used to be on the top and bottom of the cap.  It's got scratches and rubbed spots on the body of the pen.  I'm not sure how old it is, but the ink sac is still in very good condition, and the pen holds quite a bit of ink for its size, and doesn't put down a flood of it, conserving what I've loaded quite well.

So far, everyone who's been brave enough to try it has been very disappointed that I'm not selling it.  Even the students who've never used one before, and been curious enough to try it out for the novelty.

The pen's only fault that I've found is that it has somewhat of a tendency to "burp"--the air in the ink sac can expand with either weather pressure changes or temperature changes, and push the ink that's in the feed's channel out through the nib, or up and out around the feed's filler hole right up against the section.  I've learned that it needs wiped down with a paper towel when the weather changes significantly.

(The pictures for this post were taken on a college ruled notebook I had handy, with the camera case used to keep the pen rolled to the angle I wanted the picture taken from, and taken in my lap.)

*The first pen I bought was a Parker Vector in red with a fine nib, then a bright blue Parker Reflex with a badly-made medium nib that never wrote right until after I took an emery board to it and turned it into a fine, then a medium nibbed Parker Vector in jade green.
Posted by Heroditus Huxley at 8:51 PM