I am exhausted, this evening.  I busted ass all day, cleaning my living room (which hadn't had a real good cleaning since December).  I probably didn't get as much done as most would, and it took three times the amount of time to do.  Because really?  I didn't have the energy, but it had to be done.

No, it's not done yet.  Remember, I'm working with no energy or stamina.  That means everything that gets done gets done slowly.  Steadily.  With frequent breaks to rest.

I can still do it, though.  It just takes a while.

That makes it a handicap.  I can do things, it's just not as easy or as fast as it is for others.

The difference between a handicap and a disability is that a handicap doesn't remove ability, just makes things harder.  A disability means that I can't do something.

Yes, there are things I'm not able to do.  However, in most cases, my thyroid has nothing to do with that.  I can't run a marathon--or even to the end of my driveway--but that has less to do with energy and stamina, and more to do with bad ankles, knees, and boobs that would knock my ass out if I tried.  I can't reach the back of the middle shelves in my kitchen standing on the floor, but that's because I'm four feet eleven inches tall in my socks, and barely five foot even in most of my shoes.  (Five foot one, in one or two pair).

So there are disabilities, and there are handicaps, but calling everything a disability (like with the whole ADA crap) smacks of excusing laziness.

I am handicapped.  Not disabled.
Posted by Heroditus Huxley at 7:00 PM 2 comments:

Okay.  The Friatta I bought at Sam's Club was $12 for 7 servings.  Tasty, and cheaper than many fast food things, but let me break down the costs* for making your own by the recipe I found.

How much time does it take to make this?  Say fifteen minutes to cook the sausage (mix the rest of the things while you do that, and you're taking no more time) and preheat the oven, another minute to pour the mixture into the sprayed or buttered muffin tins, and thirty minutes to cook.  Figure minimum wage hourly cost (what a fast-food worker deserves to make), and you've got about $5.73 worth of time spent.

Your total, for one dozen servings, comes out to about sixteen dollars, cash plus time, or about $1.35 per serving, vs. the premade cost of $1.75 per serving.  If you leave out the time costs (which isn't much), it's under a dollar per serving.

The other major bonus to making it yourself?  You choose what goes into it, which may well bulk your price, but will also be healthier than the premade (i.e., adding mushrooms, onions, peppers, spinach, etc. costs more for the initial outlay, but...yeah, it adds more, in my opinion than it costs).

*Prices from my local Walmart.  Your costs may vary...on all of it.

Posted by Heroditus Huxley at 11:46 AM 2 comments:

I ran across something at Sam's Club--Jimmy Dean friatta.  I read through the ingredients, and found that it was basically eggs baked in a muffin cup, so I went looking for how to do that.

I found how to do it.

1. Preheat oven to 350, brown your sausage, and spray your muffin tins.
2. While your sausage is cooking, mix your eggs, heavy cream, and cheese.
3. Mix cooked sausage into the egg, then fill muffin tins to within 1/2 inch of the top.
4. Bake for 30 minutes, or until a toothpick inserted into middle comes out clean.  Try not to scorch the tops.

Depending on the size of the muffin tin, this could make anywhere from six to twelve or more muffins.  My muffin tins were the big ones, so this made six for me.

I made mine with plain bulk sausage because the imp prefers that (and he actually ate half of one of the giant muffins doused with salsa), but you can use maple sausage, add fresh spinach, mushrooms, onions, or whatever.

I'm going to be getting more eggs tomorrow, and will make some for myself with onions, peppers, and mushrooms and perhaps bacon.
Posted by Heroditus Huxley at 11:35 AM 2 comments:

Last weekend, we had a pair of contractors come in, tear down the deck, and build us a set of steps up to the back door.  It revealed a lot of slightly dangerous mess under where the deck was.  I've got some picked up, but there's a lot more to do.  Including adding twelve feet of fencing.

I managed to get the path to the back door cleared, yesterday.   Made it a lot easier to get the back yard cleanup started.  Made for some happy kids, too, both yesterday afternoon and this morning.

I got the shopping done, with two kids on Spring Break in tow.  That...wasn't fun, for all that they're much better behaved than the majority of children I see shopping with their parents.  I think this summer, shopping's going to be done early Saturday morning, either with Odysseus, or with Odysseus watching the kids while I go do it.

I have a load of laundry in the dryer, and another in the washer.  Once those are finished, I'm going to pull all of my daughter's clean clothes and rewash those--the rash she's had for a month and a half isn't what I thought it was, it's an allergic reaction to the dryer sheets I've been using for about the same length of time.

And after that, I've got the laundry to finish, and the living room to clean up.   And more to do in the bedrooms.

Fucking yay.
Posted by Heroditus Huxley at 12:23 PM No comments:

Ran across something on the book of face, last week.  I saved it, and have been ruminating on it for a while.  It's this: 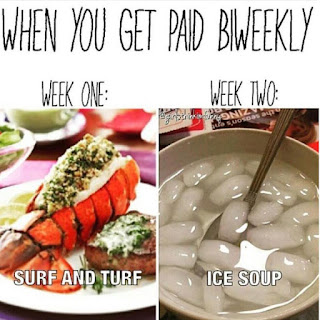 My older sister posted it.  And, like I said, it got me thinking.

I have never eaten (drank) ice soup.  Nor have I subsisted on Ramen because that was all I could afford.

I don't understand why this meme resonates to that point.  The only thing it takes to avoid ice soup and starvation is a little bit of planning, and an ability to use a microwave.

When I was student help (in college, in '01), I got paid two hundred dollars every two weeks.  I planned, budgeted, and grocery shopped.  Yes, my kitchen consisted of a cube fridge, a crock pot, and a microwave; yes, my pantry consisted of one of the two nightstands that came in the dorm room (two drawers and a cubby--held potatoes, bread, tortillas, and canned soup).  I ate very well on that, while helping my mom pay for the stupidity she chose to buy.*

And then, I graduated, got into grad school, and my paychecks started coming once a month.  It wasn't any harder budgeting for that, even when Odysseus was between jobs.  After rent and utilities were paid, and a bit put back for car insurance, we still had something around two hundred for groceries.  Between the savings card for Kroger/Dillon's, and a once-a-month hour long drive to the nearest Sam's Club, we didn't suffer.

The whole point, here, is that if you're not being paid a whole lot, and aren't getting paid often, if you learn to budget, buy groceries wisely, and learn how to cook, you're not stuck with ice soup.  Or even Ramen. 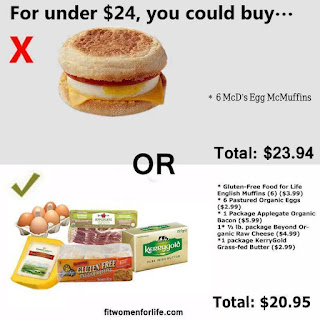 And this?  This is even cheaper if you don't have the same food intolerance (allergy to wheat) I do.  A dozen eggs will run you about $1.65 or so, around here; a pack of processed cheese slices, around $3; bacon is the most expensive at around $5/lb for the decent stuff; English muffins around $3/dozen; and butter's about $2/lb.  That total would be around $17, after sales tax.  For enough for a dozen egg sandwiches.

A 1lb bag of lentils is around $1.50 or so, now, and will make around three pots of lentil soup, which is high in protein, a lot of trace minerals, and fiber.

A 2 lb bag of black beans costs around $4, and will make a LOT of meals.

Ham bits or bacon ends costs around $5 for a 3lb package, and goes well in either lentils or beans, for extra flavor, a little fat, and a little more protein.

Plan.  Shop accordingly.  Cook your own food.  If you're too tired to cook on days you work, cook a lot on your days off, and freeze your own convenience food.

*Mom's stupidity was a Ford F-150 with the 4wd, upgraded towing tranny, bigger engine, and 180,000 miles on it.  That she bought for ten grand on a nine grand per year fixed income.

LOVE the guitar riffs on this...

The rhythm of both lyrics and melody also just do it for me.
Posted by Heroditus Huxley at 10:01 PM No comments:

I had thought I had a smarter bunch this time.

A smarter bunch wouldn't have tried to turn in papers late without having first asked for an extension.  This bunch?  Two Muslims and a theater student have all tried it.

I do not take late papers.  Not even turned in one class day late, before I've really managed to get much grading done.  I've offered them three ways to turn papers in on time: in person in hard copy, through the class site directly to the grade book, and by email attachment.  Electronic copy is due by midnight of the due date, which gives an extra thirteen or fourteen hours, depending on which class it is.

Yeah, I'm irritated.  REALLY irritated.  Because two of those papers?  Will be C papers at best, and aren't worth my time and effort due to outside issues preventing them from being capable of better.

The other one is an A student who "forgot," because she's the stage manager for both one of the university theater department's plays, and one of the local city little theater plays.  At the same time.

Yes, they have a chance to do better--I have a policy that late papers can be turned in during the two hour block of time set aside during finals week for our class.  That means, however, that they cannot revise that particular paper.

I cannot bring myself to care that that means that two of them will likely lose their scholarships and be sent home.

I cannot bring myself to care that that means that the other will likely lose a potential letter grade from her potential final grade.

They're supposed to be adults.  I cannot let myself care about whether they succeed or not.  They have to learn to do this on their own.