I have vintage ink on my hands, and I feel better.

Okay, at second look, I think I have a second pen that is in good shape where the sac is concerned...it expels bubbles in water when the lever is lifted.  It's a gorgeous green Arnold pen with a silver toned cap.  It's really, really ink clogged in the nib, though--I've got it soaking to try to get it all the way back in working order before I take pictures (and yes, I do plan on selling it despite how pretty it is).

One of the pens, a Collins lever fill, had a sac.  Had.  Some nitwit had tried refurbishing the pen, and had put the nib section and sac back into the pen before the rubber cement was dry, and wound up gluing the bar inside to the sac...and the bar to the lever (though not too bad, on that--pulling everything got the lever to work).  It's going to be second to last on my list to repair, and will go up for sale as soon as I get it fixed and running right.

Sadly, I cannot find a pen feed for the Waltham with the broken feed glued together with dried ink, nor for the cute little Eclipse pendant pen.  Nor can I find a nib to fit the Eclipse pen.  I think those two, and the two pencil/pen combos are going to have to be parts pens.  Also, one of the Wearever pens I have (the one that was badly refurbished) is going to have to be a parts pen, due to the splits in the barrel.

I have two more Wearever pens, one lever fill one cartridge.  The cartridges haven't been made in about fifty years, and the piercing tip that punctured the cartridge is just a little too big for anything made modern.  I even tried a Lamy converter, and it wasn't quite big enough.  I've seen it recommended that the Wearever cartridge pens that are in good shape and without cracks can/should be converted to eyedropper fill...and I guess that's what's going to have to happen (yes, I'll post pictures--it looks to be an easy process, even if messy with the silicon grease).  That pen has a medium nib, while the lever fill (which is bent quite badly just past the lever box) has a flex nib.

I have another nameless fountain pen--the only markings on it are "Made in USA" and the engraved, gold-leafed name of whoever had the pen--that I managed to pull apart today.  It took the application of a heat gun and a pair of section pliers,* but it came apart.  I took pictures of the pen pulled apart, and with the shattered sac laying in shards next to it. 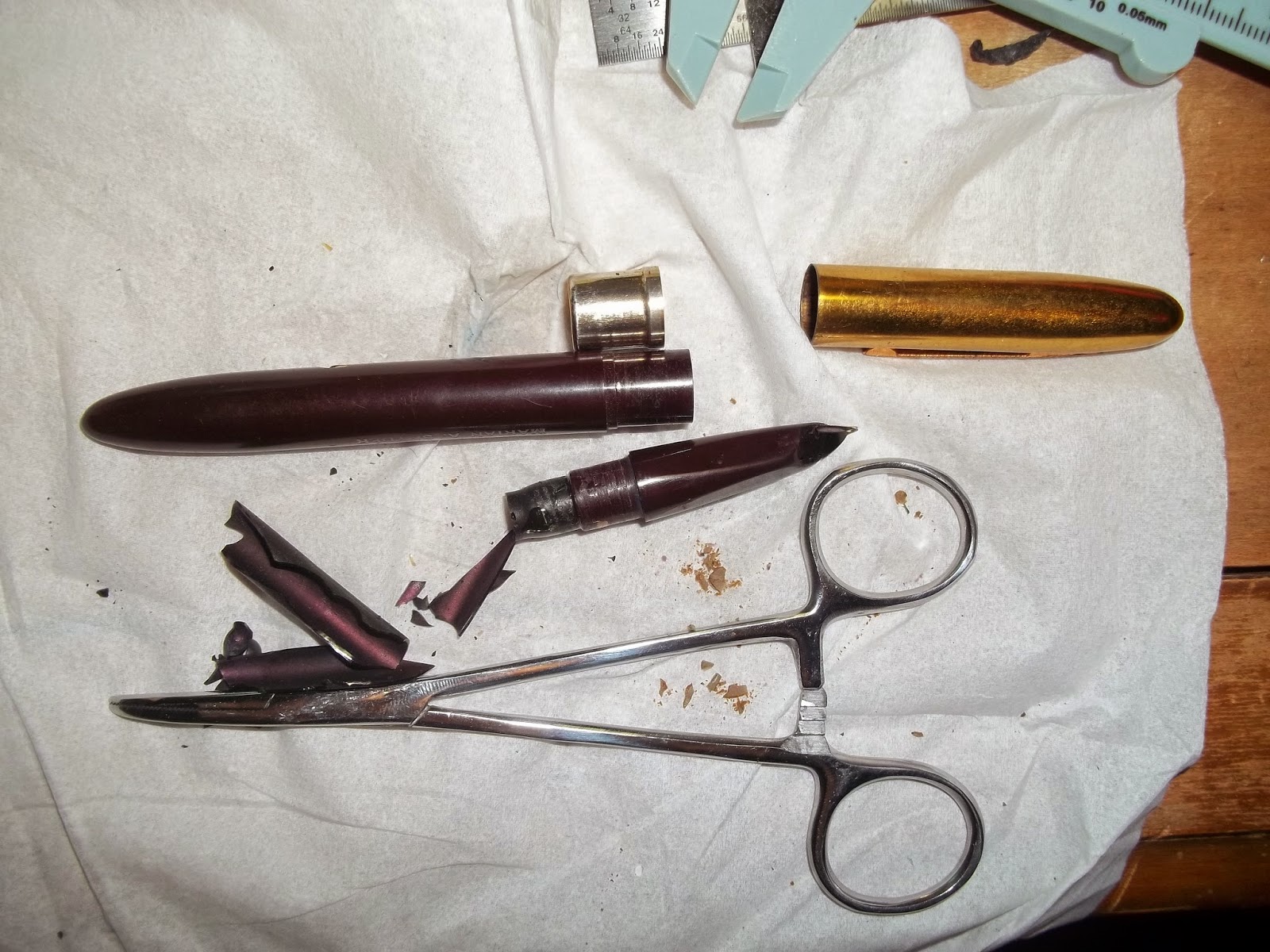 On the left side of the top, there's a ring that fits down over the top of the barrel and lets the cap fit down tightly over the nib.  The cap is a sort of dulled gold-tone, sort of with a bit of brass look to it (probably cheap).  You can sorta see that the section where you hold the pen is shaped: a rounded triangle that makes it really comfortable to hold.  It's burgundy, which is difficult to make out with the lighting and the way the pic turned out.

Right next to the barrel, between it and the pair of forceps I used to pull the bigger pieces out, you can see the rubber shards.

Here's a better picture of the hardened/shattered rubber sac: 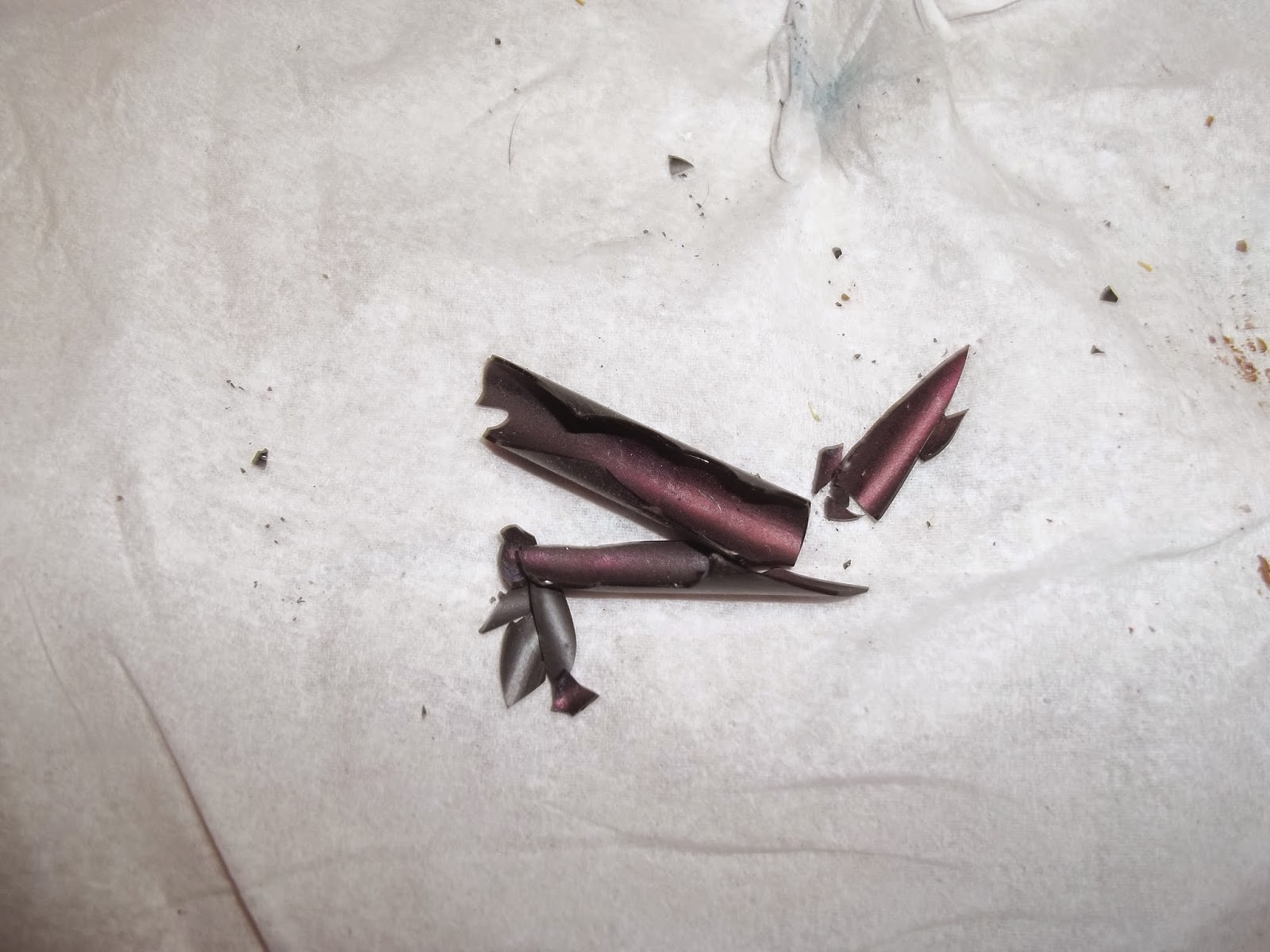 I've taken to calling the rubber shards "pen poop," mostly because they can sometimes be small enough to sift out through the lever box, and into my hand when I shake the pen.

Although, I may need to find a different thing to call them.  Some of the pieces can be really sharp...

More pics to follow as I order and fit new sacs.
Posted by Heroditus Huxley at 6:53 PM