I hate doctor's offices.  I really do.

So, I got home today to a message on my answering machine, from my doctor's office, demanding that I call to get the results, and new orders on my meds.

Of course, I called.  Immediately.  Got the office answering machine.  Waited through the standard orders to call the ER if it's an emergency.

Found out that the doc's office closes at 1:00 Friday afternoons.

I didn't get home until a quarter after.  Because my last class runs 'til 12:50, and the last two students--the only two that had stuck around for all of freewrite--didn't leave until five minutes after that.

A matter of taste

Music is, I know, in the ear of the listener, but I have got to gripe about a few bands.  Bands that, I believe, should not be played at all on the stations I listen to.  Those are Green Day, Chevelle, and Limp Bizkit (sp?  Fred Durst was a self-important moron that purposely spelled the word wrong).

Green Day...I listened to protest music written in the '60's all through my childhood.  Also listened to the roots of punk, and listened to punk.  That was quality music, even when I disagreed with the message.

Green Day...Green Day isn't punk.  It isn't rock.  It isn't anything but a spoiled brat either whining or screaming protest lyrics into a microphone to a background of something resembling the dregs of punk crossed with standard Christian "rock" music's quality.  I know they're capable of actual music.  There's one of their songs I actually like, because it shows the talent that I was certain they lacked entirely.

Chevelle...whining, navel-gazing shit.  Their instrumentals are decent, but they need to shoot their lead singer from a canon.  Same with their lyricist, if it's not the same person.

Limp...whatever.  Yeah, Fred Durst is a whiny-sounding bastard that thinks he's tough.  He's a wanna-be at best, and has no talent at rapping.  The whining...dear God, it didn't used to bother me as much as it has since I had children.  He literally whines worse than both of my kids put together, and I want to slap the words right out of his mouth when I hear him come on the radio.

He covered, at one point, "Behind Blue Eyes."  He did a really good job with it--his interpretation of the melody and lyrics were well done.  Still whiny, but well done.  He is at least minimally capable of repressing the whiny nature of his voice--I don't know why he thought it suited rap.

None of this shit belongs on the same stations that play actual music.  I think they'd fit right in on the top 40 pop stations.

And I wouldn't have to turn my radio off so often to avoid the irritation.
Posted by Heroditus Huxley at 8:22 AM 2 comments: 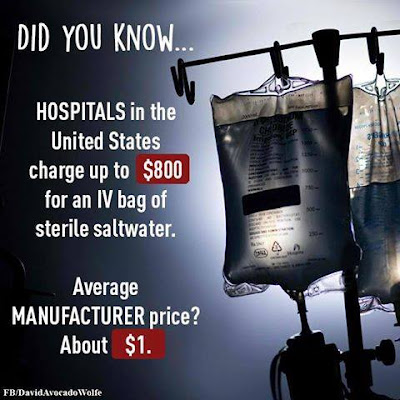 1. Manufacturer price does not include shipping, delivery, inventory, staff costs, etc., which the hospital still has to pay.

2. Medicare pays about 60%, and Medicaid maybe 40% of the hospital's cost, not their asking price. And the hospital isn't permitted to deny service to those who can't pay even that much.

3. Those of us who are either responsible enough to budget for medical care (doable for most, even on minimum wage, with a bit of prioritizing needs over wants), or lucky enough to have a job that has decent health care insurance, are stuck footing the bills for everyone else.
Posted by Heroditus Huxley at 8:00 AM 2 comments:

Fall semester for the 2017 Academic Year is halfway done: last week was week eight of sixteen (I don't count finals week, since I'll not be on campus, just accepting late work by email during the two hour block set aside for final exams*).

So, hitting the midpoint of semester means turning in midterm grades.  As requested by my Comp 2 classes, I turned theirs in first, before I graded their second paper. I need to get my Comp 1 class's blogs graded, and revisions that were turned in graded...and papers that were turned in to the wrong slot in BB graded.  Then, I can turn in their midterms.

But first...another pot of coffee is absolutely called for.

*Idiot university president decided that all classes must do something graded for final exam time.  Even the skills classes for which you cannot actually devise an exam.
Posted by Heroditus Huxley at 9:56 AM No comments:

I actually was starting a post.  Didn't have even the title done.  And the stupid platform assumes I hit the publish button.

And that's on top of the job of re-creating the blog roll...something I don't have time to do right now, considering I've got to turn in midterms for Comp 2 before I get stuck into grading papers, grade Comp 1 blogs *then* turn in midterms, then grade two Comp 2 classes' worth of papers.

And in two more weeks, I'll have all three classes having a paper due.

I think I'm going to have to wait on trying to fix what Blogger's screwed up.
Posted by Heroditus Huxley at 6:37 PM No comments:

The pixie has a field trip to the pumpkin patch.

And, to compound the day, I've got papers coming in, and Comp 1 blogs to grade.

At least I've got a full cup of coffee, and some music to grade with.

Best get on it, then.  Even if I'd rather be curled up sleeping.
Posted by Heroditus Huxley at 8:11 AM 2 comments:

I've been trying to get back into writing, recently.  Listening to my inspiration for The Schrodinger Paradox.  Reading and editing the stuff I'd had done.  Working long-hand.  I'm working on transcribing stuff tonight, tomorrow, and probably every spare minute through Thursday.  I've got most of it plotted out in my head.  I know where it's going, and I know why it's going there.  And I'm hoping to finish part 2 this month.  I'd like to finish the book in its entirety (part 2, 3, and an epilogue) by the end of the kids' fall semester.

After that?  I've got half a dozen stories I need to transcribe out of my draft book I carry in my purse for random ideas.  I've got random stories that will go into a collection, and a few that will go into my Modern Gods world, somewhere.  I've got two more book ideas started (a veteran addicted to drugs getting rescuing kids orphaned by a hurricane and getting clean, and a vampire investments agent who recruits a P.I. roommate to help her out during daylight hours), and another two ideas percolating in the back of my head.

Honestly, where the Modern Gods world is concerned, I've got only one more overarching plot tying a bunch of stories together type novel, for now.  I could be wrong, but I think that's it.  Kinda makes me sad, because those have been some of my favorite characters to work with.

Any case, I think I've sort of hit my stride with doing three classes.  I don't feel so overwhelmed with the workload, now.  I think I've got things arranged to where I'll only be on campus two days a week, next semester, with three classes in the mornings, and office hours in the afternoon.  I've done some writing in office hours, but not that much.  Usually, my morning office hours are spent downing the coffee I didn't have time to drink before sitting down in the office.  And catching up on paperwork for classes and email.  And grading.

But it does feel good to write again.  Relieves a mental/emotional pressure that I'm often not aware is building until after something gives way.
Posted by Heroditus Huxley at 8:16 PM 2 comments:

So.  ISIS is calling for knife attacks.  In America.

THAT...that is a BRILLIANT idea.  Especially in the center of the country, and throughout the South.

I LOVE the idea of terrorists bringing a knife to what ends up a gun fight!
Posted by Heroditus Huxley at 7:16 PM No comments: