Gotta share this with inflict this on everyone else.

Posted by Heroditus Huxley at 8:43 PM No comments:

Not on a freakin' lost bet.

About forty-five minutes after we put the kids to bed, the neighbor kids were knocking on our door, asking if our kids could come out and play...

Yeah, no.  Unlike the crotchfruit next door, my children have a very strict bedtime, even during summer.  It isn't just me being a bitchy mommy, either; both children are very cheery little morning people if they're put to bed early.  If they're not put to bed early, they're still morning people, but not so cheery.  In fact, the children become downright assholes if they don't get enough sleep.

It doesn't matter, either, what time I put them to bed.  The latest they're up is 7:00, and that's if it's a dark, cloudy, quietly rainy morning that absorbs sound.  The usual is more like 6:00, or just after.

I have tried putting them to bed late, in the hopes that they wake up late.  It doesn't work.  It never works.

(I really, really wish it would work...)

So.  No, my children are not playing with the crotchfruit next door.  Not unless they get up and come out to play while mine are outside in the morning while I'm drinking my coffee before 7:00, while it's not raining (it's in the forecast until the second of June, on a daily basis in the late mornings on, 'round here) and relatively cool.

And if they don't want to play because they want to sleep and can't because my kids are being noisy in their own yard?  Tough shit.  I honestly half hope it does wake them up, and that they wake the adults in the house up, because they make it incredibly difficult for my children to actually go to sleep.

I can't wait to get outside of town where we can have no close neighbors...
Posted by Heroditus Huxley at 9:07 PM 2 comments:

I noted, just before I went in for surgery, that we have possible poison oak growing in the back yard, and in one of the front beds.  Looks like oak leaves, but on a vine.  Five leaves in a bunch.  I don't have a camera handy--oh wait, the kids just brought me the camera.  Here's the damn plant: 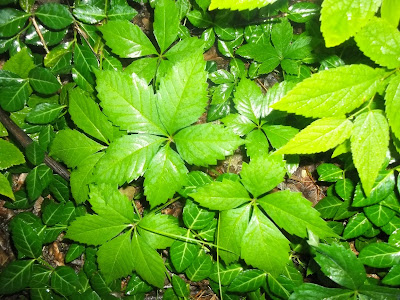 I don't know what it is.  I do know that until I know, I can't take the kids outside.

And I want to take the kids outside.  At six fucking thirty in the morning.  And let them run screaming around the yard, waking the new neighbors up.  I want to do this every morning.

Because they're doing this every night, right around the time I'm making my kids go to bed.

Posted by Heroditus Huxley at 11:33 AM 6 comments:

Yet another fucking idiot that can't fucking read

I don't know how widely this has been disseminated, but Justice Sonia Sotomayor has come out and flat-out said she doesn't understand her job.

Where this clashes with her job is that she is currently a Supreme Court justice.  Someone whose entire job has to do with whether a law is or is not constitutional.  Whether or not a law is rendered illegal by whether or not it contravenes any part--original or amendments--of the Supreme Law of the land.

Neither slavery nor involuntary servitude, except as a punishment for crime whereof the party shall have been duly convicted, shall exist within the United States, or any place subject to their jurisdiction. --Amendment 13


It seems to me like it takes a lawyer to misunderstand the clear language in the Constitution and its amendments.

Maybe lawyers should be banned from serving as Supreme Court justices.
Posted by Heroditus Huxley at 7:50 PM 10 comments:

I went in for a follow-up with my surgeon, today.  He gave me the path report (good--no cancer), a boost on my dosage (50 mcg to 125 mcg of thyroid replacement), and removed the stitches and told me to move my head a bit (but not to tip it back just yet) so that the scar tissue didn't stiffen up.

I go back in six weeks for blood work to see if the new dose is what I need.
Posted by Heroditus Huxley at 2:35 PM 4 comments:

Okay, so last Friday, I had surgery.  A total thyroidectomy.  I have family history of goiters and nodules, and my dad and his brother had thyroid cancer.  A couple of relatives on the paternal side have had Graves Disease, and a couple on both sides have had Hashimoto's Thyroiditis (an autoimmune disease where your body starts treating your thyroid like a virus, killing it and causing severe hypothyroidism). And I had nodules, a goiter, and a non-functional thyroid.  So, it came out.

Side note: I am mildly allergic to morphine (severe nausea, rash down chest and belly, and difficulty retaining consciousness) and codeine (hives and facial swelling).  And Darvocet is off the market, thanks to the FDA deciding it's better to preserve the lives of fools that overdose than it is to alleviate the pain of those who are allergic to other pain meds.

I spent Friday night through Saturday lunch in the hospital, and came home Saturday with the drain tube still in.

(Did y'all know that the surgery recovery beds molest you in your sleep?  The nurses said that it would periodically deflate and inflate, but it felt kinda like shiatsu massage.  And with my lack of height, it meant the bed humped my butt every few minutes for as long as I was in it.)

I've been managing pain with ice packs, and Tylenol as best I could until I got home to my useful pain management.  After that, what hurt the worst was the drain tube that was still there.  I was told to empty and measure it twice a day (I did), and come in this morning to get it out.

That.  Hurt.  A lot.  The tube was one that went under both sides of the thyroid from the middle.  And pulling it out hurt like a bitch.  It's better, now, after Aleve and an ice pack.  But yeah.

Such was my weekend.  And I still have blood in my hair until my other half gets home to help me wash it out in the shower.
Posted by Heroditus Huxley at 12:05 PM 4 comments:

Can I please have students not try to insult my intelligence by plagiarizing the sample in the freakin' class handbook?

Yeah, somebody just failed my class.
Posted by Heroditus Huxley at 9:57 AM 2 comments:

How much clearer can I possibly be?

"You have the two hour block set aside for your class's final exam time to email me anything you didn't turn in over the course of the semester."

"Email things to me.  I will not be on campus during finals week."

"The last day I will be on campus is the last day of classes, Friday, May 6."

"If you haven't turned in anything over the course of the semester, you have one last chance during [this two hour block] on [this day] to email it to me, because I will not be on campus during finals week."

These things have been iterated and reiterated on a daily basis for the past fucking month, both verbal and written.  I still have students trying to find me on campus, to turn in hard copy, and not during the set final exam time.  I have students sending me things three or four hours late.

I'm heading into Friday's surgery with a fuck-ton not finished up around the house.  The living room is a fucking disaster, as is the kitchen, and the master bedroom/bathroom.  I do not yet know what time I am supposed to show up for surgery, nor can I find out before Thursday when the hospital calls me.  I have the kids to plan for, the landscapers to watch for, and a whole mess of other things relevant to my LIFE going on.  I cannot handle whiny-ass students who don't fucking listen and fucking pay fucking attention on top of all the other shit I've got going on.

I'm about ready to turn in all grades, my grade books, and everything, and tell the stupid shits that think they're adults to go fuck themselves with a fucking cactus impaled on a reciprocating saw.
Posted by Heroditus Huxley at 9:54 AM 4 comments:

I know nobody wants to hear the truth about themselves, but damn.

Recently, I was talking to my mother.  She said she was thinking of seeing a psychologist to see if she could get them to figure out why no one liked her and wanted to be around her for long, why people tend to turn against her after a bit of time in her company.

"You self-sabotage, and sabotage others around you.  You also act like you expect others to bail you out when you do this."

"I don't understand what you mean."

"You bought a new couch.  The old one was perfectly fine--you just didn't like it.  I helped you out with groceries since that was your savings plus your grocery money.  Now, your water heater, washer, and air conditioner have all given up at once.  You had no savings, and asked the church to help you with the water heater (which they did).  Instead of getting your washer, which was still under warranty, fixed, you decided to take your savings, the money from your secondhand toilet you sold, and [sister's], and buy a new to you one.  Your AC is still out.  And now, [sister] can't afford the new mattress she needs without paying financing charges, and can't move out because you've sabotaged yourself and her financially.  And you're helpless to fix this by yourself.  And you expect others to help you out of the mess you got yourself into."

"I still don't understand.  Why won't you tell me straight out, instead of dancing around it?"

I don't think I can use small enough words to get this across to her.  There is not a single shrink in the world that can.  And then she'll wonder why they write her off when they do.

I wonder how the hell I wound up as sane and reasonable as I did with this for an example.
Posted by Heroditus Huxley at 9:38 AM 6 comments: