We had to get the imp and pixie new shoes, a size up from what they'd been in.  The pixie picked a couple of pair of thin, flimsy canvas ballet flat style shoes, with straps across the arches of her feet.  The two together cost about the same as the one pair we found in the imp's size.

The imp's shoes are a medium gray with orange lining, orange soles, and orange laces.  Yes, laces.  I'm starting to try to teach him to tie his shoes.  It's not easy when he doesn't listen.

The reason he's got lace-up shoes is because those were the only ones in a reasonable price range actually in his size.  I'm not spending fifteen dollars on a pair that has a Marvel character or lights up, when they're going to be destroyed in three months' time by a rambunctious little boy.  Or outgrown in six months.

Speaking of those shoes, the pixie did something incredibly cute with them, and with one of the imp's stuffed toy, a Japanese monster toy that he picked out for himself when he was about eight months old.  (TinCan Assassin took the picture) 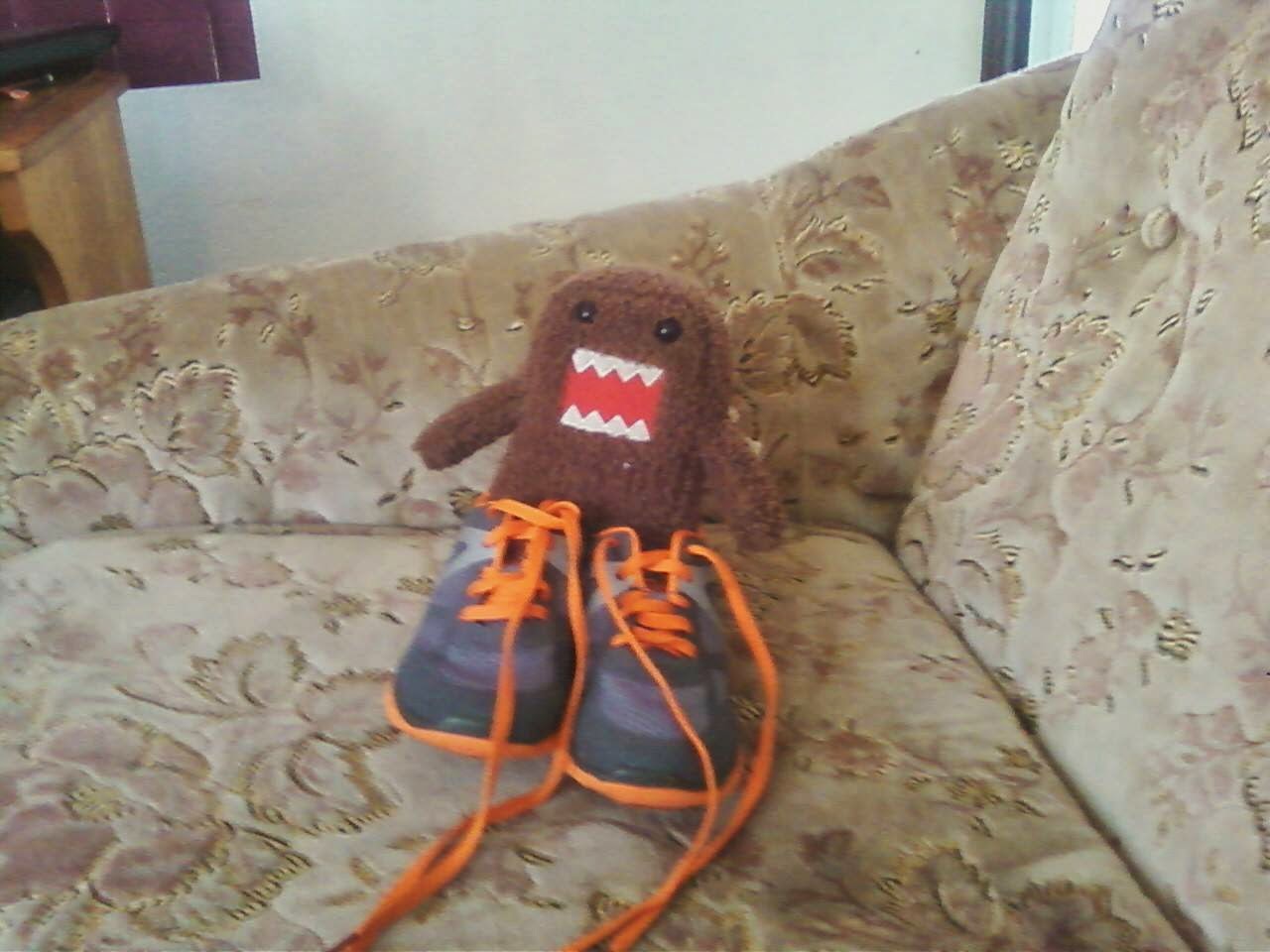 If that's not cute, I'm not sure what is.

The kids are watching The Sword in the Stone, this morning, due to a dearth of quality children's programming on television.  They seem to really like the old Disney cartoons, with the old style of animation, a lot better than they like the current trend toward a more computer graphics style of animation.  Pixie didn't much care one way or the other for Frozen.  To be honest, I didn't really like it much, either.

Shadow vanished for about six hours on Tuesday.  I knew she hadn't gotten out, so I wasn't terribly concerned.  Cricket was missing her lost brain, though (she doesn't have one of her own, I think, so she uses Shadow's).  Eventually, about an hour and a half after the imp went to bed, I hear a soft mew, and soft scratching at his bedroom door.

She'd managed to hide well enough in the imp's room that I missed her when I was checking the kids' rooms before putting the kids to bed.

The dog has been a very happy dog, lately.  She's spent the majority of every day outside, and the neighbor to the south has acquired an adorable (and quite lovely) little Shi Tzu male.  The two have become fence friends.  It's cute--they yap at each other, and run back and forth along the fence line, playing.

That neighbor's dog is very good with kids.  The pixie and I took the neighbor a third of a cup of dried minced onions (about one onion, reconstituted), and the dog heard the pixie, dodged legs positioned to keep him inside, and dashed right into her open arms, leaning into the hug with his tail sweeping up a dust cloud on the neighbor's porch.

My dog?  Not so much.  She's still very much puppy between the ears.  Rambunctious.  And twenty plus pounds to the pixie's thirty (and the imp's forty).

Classes start back up next week--they're workshopping on Tuesday, and their papers are due on Thursday.  I'd planned to get the corner around the sewing machine fixed up this week, maybe use the sewing table as a desk for grading to see if that would work better for me, and I've failed.  Badly.  I don't even have last week's clean laundry put away, much less any of the cleaning/straightening/decluttering I'd planned for this week.  Kinda sucks, really.


I haven't gotten any more done on Pendragon Resurgent.  I'll try to work on that next week, if I can get caught up on housework.  I've just not had the energy to do more than load and unload the dishwasher.  I cannot seem to shake this damn cold.

I've nearly finished Progeny's horse story--tentatively titled Lizzy's Tail.  I'm thinking it'll be around 75 pages, plus or minus about ten, when it's published in paperback.  Both of her parents have read an unfinished draft, and approved it.  TCA has asked for a couple of copies to donate to the Catholic school Progeny attends.  I have no problem with that.
Posted by Heroditus Huxley at 9:35 AM