I saw this story a couple of days ago, then again yesterday at Kickin' and Screamin'. Apparently, Wal-Mart is racist for marking down a Barbie that's not selling well. And, as Vilmar put it, the race-baiters are pissed off. 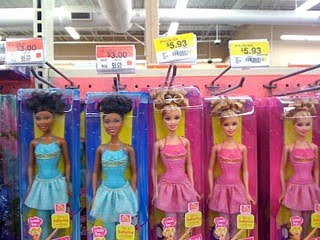 They obviously don't understand supply and demand. If two identical but cosmetically different items are produced at the same cost, but only one item sells well (for whatever reason), stores have to mark the other item down until it, too, sells, just to clear shelf space for more items that will sell at the initial price.

That doesn't make the stores racist. If anything, the shoppers are the ones mostly to blame for not wanting the black doll.

Personally, I'd've rather had the black doll. I think her coloring and dress are far prettier than the pale, blond, blue-eyed bimbo in pink.

Posted by Heroditus Huxley at 10:34 AM