I had one of my students ask me what I knew about "ISIS or ISIL, or whatever they're calling themselves, now."  She asked me who they were, what they did, and whether I thought they were a danger.

So, I told her.  And watched her turn gray when I mentioned that they'd been seen in country, thanks to our non-existent southern border.

And then, I pull up FB and find this: a brand new Muslim, converted in jail, gets fired, gets pissed off, beheads the first person he runs into in the plant, and stabs another.  He'd have probably done more damage had it not been for the COO of the company, who was a concealed carry holder and "reserve" deputy.  I can't find the press release to link, but here is a photo: 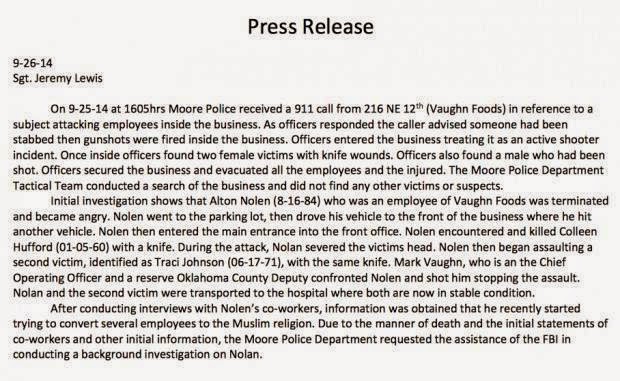 I've seen it written that it's "extremism," and that it wouldn't be any different if it were a Christian.

I beg to differ.  The most I've ever seen Christian extremists do, as a group, is annoy the hell out of people, and tell them that they're going to hell.  An extremist Muslim attempts to send people there on the express lane.
Posted by Heroditus Huxley at 7:06 PM