A couple of days ago, I ran into one of my former students in the local big-box-store's sporting goods section, buying a fishing license. We got to talking, and he brought up the Amy Bishop thing, and said he was glad he was nearly ready to graduate. He said he was tired of waiting for some nut-job to come on campus and open fire.

So, I pulled out my CCW, and told him that I was planning on ignoring the no-weapons policy on our local campus when I went back to work. I told him that there was no way I was going to permit some douchebag in the administration to turn my students into statistics with that policy.

His shoulders kinda relaxed, and he said that if some crazy person was going to ignore the signs and bring a gun on campus to commit violence, that there needed to be a crazy person bringing guns onto campus to prevent that.

My state recently considered (briefly, before they shot it down) a law requiring state colleges and universities to permit faculty with CCWs to carry on campus. I really wish they hadn't shot it down, because if I have to draw down to prevent a mass murderer from turning my students into statistics, I likely would get fired. 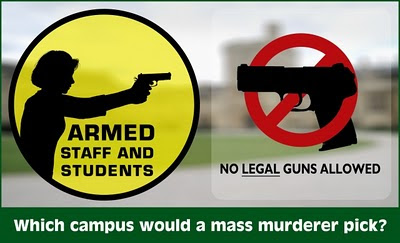 It would have been a far lower death toll at Columbine High School in 1999, had faculty been carrying (I think--it's entirely possible that no teacher could have brought themselves to kill one of their students). Math teacher David Benke would have had a far easier and safer job stopping the crazy bastard shooting at his middle-school students had he been permitted to carry a gun. Colorado State's faculty and Board of Governors just turned their students into walking targets in a target-rich environment.
Posted by Heroditus Huxley at 9:34 AM