First off, let me say that I'm not accusing necessarily one party over the other on this issue. I'm pretty sure that either would try to stifle news and speech that showed them in a bad light. I do not have a high opinion of politicians in general, with a very few, individual, exceptions. Granted, many, if not most, of the links that I've found refer to Leftist suppression of speech. I'm not going to comment on the whys and wherefores of that. I don't care.

What I do care about is that it seems like we're drifting from the intentions that the founding fathers set up in the first amendment more towards an Orwellian doublespeak interpretation of "free speech."

Let's start with education. The Foundation for Individual Rights in Education (The FIRE) was created to protect the rights of students and professors to free speech on college campuses. They don't care if the opinions and speech being suppressed is Leftist, or Rightist. They only care that it is being suppressed, and provide legal services to get it restored. The scary part is that they have so very much work to do, thanks to college and university speech codes. These speech codes, which exist on most campuses to a greater or lesser extent, set up minuscule "free speech zones," and punish any speech or opinion that makes anyone feel uncomfortable, harassed, or "unsafe" in any way. Don't believe me that people can be so sensitive? Take a look at what happens to those who put on Affirmative Action Bake Sales.

I'm glad that organizations like The FIRE exist. I am, however, saddened and horrified that they need to. Most of the universities that The FIRE prosecutes are public, government run institutions. That means that they are constitutionally restricted from preventing speech that the majority doesn't agree with, or that the administration feels is "wrong."

The restriction of political speech is worse. I've found several examples of this type of restriction for your reading, um, pleasure.

We have the Fairness Doctrine that, on the surface, seems to do nothing more than make sure both sides have an equal voice in public media outlets. However, as applied, it would more likely silence talk radio (which is for profit, meaning that the public chooses what to listen to. So far, the far Left has not been able to compete with the Rightist radio hosts commercially). I don't know if it would affect the television news media at all, and if so, to what extent, since most of that leans at the least a little left, and at most a lot left.

We have action groups that seek to intimidate donors and supporters. We have a current political candidate attempting to silence ads that show that he has connections to a '60's radical.

Once again, I'm not saying that the Right doesn't do this, as well. If so, I don't know whether it is as well documented or not. I don't care. I don't like this happening on either side of the aisle. I don't want to see the world slipping toward the one Orwell envisioned in 1984. 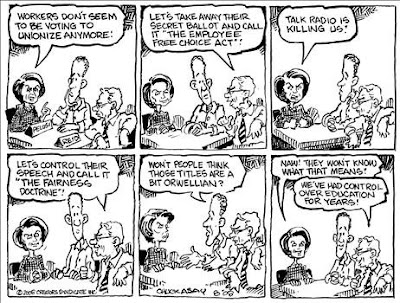 Posted by Heroditus Huxley at 11:26 AM