How does a university president get credit for not having underage drinking on campus?

By campaigning to get the legal drinking age changed, of course.

It's likely far from that altruistic.

Imagine being the university president, during whose tenure, underage drinking vanished on your campus. That's a pretty big feather in your cap, isn't it?

There are, of course, opponents. There are always opponents. Their side is mentioned in the news link above. I'll leave it up to you to decide which side you agree with. 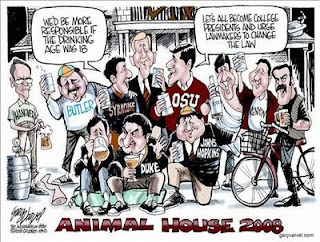 Posted by Heroditus Huxley at 8:36 AM