Hooray! A reason to vote for someone!

Robert Heinlein said once that if you can't find someone to vote for, ask any idiot off the street who he's voting for, and why--then vote for the other guy. That's a depressing philosophy. I hate voting against someone. I'd far rather be exited, or at least willing, to vote for someone.

A whole lot of conservatives agree with me. Last January, for example, Dr. James Dobson said he couldn't vote for McCain under any circumstances. Friday, McCain finally gave those who didn't want to cast a vote for him just to vote against Obama a reason to vote, and vote for him.

Her name is Sarah Palin.

She is a mother of five--ranging in ages from 19 years, and headed for Iraq, down to 4 months with Downs Syndrome. She's (obviously) pro-life, "a union member, hockey player and moose hunter. She is said to be a reformer who takes pride in standing up to the 'good ol’ boy network,' and she has served as the top ethics watchdog in her state."

Conservatives are getting excited. Zogby reports that "The latest nationwide survey, begun Friday afternoon after the McCain announcement of Palin as running mate and completed mid-afternoon today, shows McCain/Palin at 47%, compared to 45% support for Obama/Biden. In other words, the race is a dead heat." And this is after the Democratic National Convention, when the Democratic candidate is usually heavily in the lead.

Kill the Cat does a great job pointing out the obvious pros of the Palin choice. His cons are ... problematic. Let me go through them and rebut them here.

1. Who the hell is Sarah Palin? No one knows her. The McCain camp is going to need to define her and hope to hell they do it before Obama does.

First of all, I think that's a pro. Besides, she did a fair job defining herself in her initial acceptance speech, and I think she'll define herself better than anyone else possibly can within the next two months.

The Daily Kos, however, struck the first really low blow in the attempt to define her. I'll link to them here, but I will not repeat what they said.

2. She's under federal investigation for abuse of power. Hmm, abuse of power - that certainly negates the "I'm nothing like Bush" argument.

First of all, she's not under federal investigation. She's under investigation by a state ethics committee. There are allegations, but she has discussed what's going on.

"A state investigation is probing allegations that Ms Palin fired Alaska’s public safety commissioner because he did not fire her former brother-in-law, a state trooper engaged in a child custody fight with Ms Palin’s sister. The vice-presidential pick has admitted that a member of her staff called another trooper, in a move that might have applied pressure to fire her former brother-in-law, but said she did not authorise the call."

The Alaskan politicians under federal investigation are those she cleared out of office as a reformer, and one of the current senators, Ted Stevens, and the current representative, Don Young.

3. She has praised Obama in the not-so-distant past regarding his energy plan - a definite difference between he and McCain.

This is true, as far as it goes. What she specifically praised was this political promise:

I'm glad to see Obama's listening to Paris Hilton. I wish McCain would, too, because I think her energy plan makes more sense than both of theirs initially did.

However, like all political promises, I doubt this one would be fulfilled--by either candidate.

4. She has only held elective office for a total of two years. This causes the McCain camp to give up the argument that Obama is inexperienced. Especially because he has held elected office 8 years longer than she.

This completely ignores her eight years as a mayor of a small town. John Zogby rightfully points out that small town politics can be far more vicious and cutthroat than those of larger towns. In other words, she's not only got two years of elected office experience on Obama, but that all ten of her years of elected office--as mayor and governor--give her ten more years of executive experience than all of the other candidates, presidential and vice, put together.

Whether or not McCain's choice of Palin as a running mate can be seen as condescending is, I believe, made a moot point by the woman's own point of view.

"Palin noted that she was following in the footsteps of former New York Rep. Geraldine Ferraro, who was Walter Mondale’s running mate in 1984, and New York Sen. Hillary Clinton, who Palin noted had made '18 million cracks' in the glass ceiling in her presidential bid this year.

'It turns out that women in America aren’t finished yet, and we can shatter that glass ceiling once and for all,' Palin said to rousing applause."

Somehow, I don't think that, even if the choice was made for condescending reasons (which it may well have been--but not necessarily towards women so much as the traditional Republican base), many people will see Palin as nothing more than a pretty doll of a candidate that McCain chose to get the girl vote.

6. The Alaskan Republican party is a mess and though she is not currently linked to them, Senator Ted Stevens and Representative Don Young are in legal pickles of their own. This is also giving democrats an edge in Alaska and could further hurt the McCain camp up there.

Let's let her record speak first. “In Alaska, Governor Palin challenged a corrupt system and passed a landmark ethics reform bill. She has actually used her veto and cut budgetary spending. She put a stop to the ‘bridge to nowhere’ that would have cost taxpayers $400 million dollars.”

She also sold the former governor of Alaska's jet--a jet bought with corrupt money, on payments, against the wishes of the state legislature--on e-bay, about a week after she was elected governor.

I think she's an excellent choice for VP. I think she's going to do more for McCain's campaign than Biden will for Obama's.

Pollster John Zogby says "Palin is not to be underestimated. Her real strength is that she is authentic, a real mom, an outdoors person, a small town mayor (hey, she has dealt with a small town city council - that alone could be preparation for staring down Vladimir Putin, right?). She is also a reformer."

I say that Democrats had better stop pointing out how old McCain is. Republicans are starting to look at that, look at his veep choice, and giggle.
Update: My friend, Kill the Cat, has responded to this post. His main criticism focuses on Palin's lack of experience. Here's my response to that criticism: 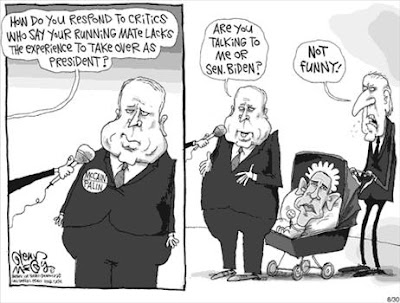 Posted by Heroditus Huxley at 9:37 AM