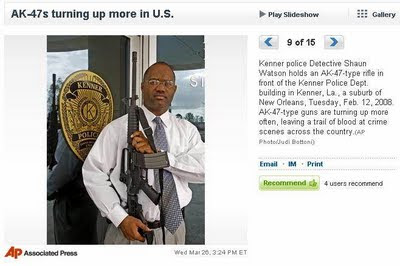 Then again, what else do we expect from the MSM?

The caption on the captured pic describes a police detective holding an AK-47, which (according to the hyperbole) have been used more and more often in bloodbaths. Oh, sorry--"leaving a trail of blood at crime scenes across the country."

This picture is not of a man holding an AK-47. What he's holding is an AR-15: a civilian-legal, semi-auto only, superbly accurate "assault" rifle.

The term "assault rifle" is, in itself, an assault on gun rights. These rifles are fully civilian legal, and are often used in hunting (deer, not libtards), sport shooting, and general family fun target shooting. Calling them "assault rifles" is meant to make it seem that they're only used to murder other human beings, when 99.9% of the time, they're not.

The anti-gun lobby is only trying to make it seem like we legal gun owners are going to kill all of you in your sleep. The only ones who might be trying to kill the average American in his or her sleep are illegal gun owners (i.e., thugs), and the federal government's proposed mandatory Medicaid death panels.

If we legal gun owners are going to kill someone, it's going to be someone who's attacked us first, and we're far more likely to use a handgun.

And the MSM and anti-gun lobby would do better if they could accurately name the gun the officer is holding.
Posted by Heroditus Huxley at 8:17 PM