Iran is issuing warnings to us not to violate their airspace. They don't have to worry about that. Not now. A new president has been elected, one who'd rather negotiate than act to protect those who elected him. I will not comment on whether I think that policy is wise, or not. I'm not in the hotseat. I can't know. History will be the judge of the new President's policies.

Barack Obama has, however, made history simply by being elected. Despite the misunderstood quote about Bill Clinton being the United States' first black president, we actually have now elected one.

Celebrations are going on, both in the United States and worldwide. 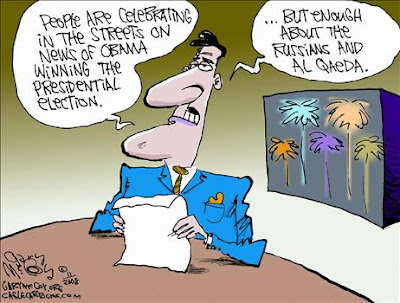 The only people who aren't happy with the way this race turned out are conservatives who fear for the well-being of their country.

While I'd rather not have had him as president, I will be praying that his Secret Service agents are better than the nutjobs gunning for him. I don't want to see him joining the same club of assassinated government officials and presidents as Alexander Hamilton, Abraham Lincoln, and John F. Kennedy.

Posted by Heroditus Huxley at 7:26 AM