I've mentioned my great grandma's sewing machine a couple times.  Well, I have successfully used it (the project in the picture was the first thing I'd made since high school).  And I've learned a few more things about it. 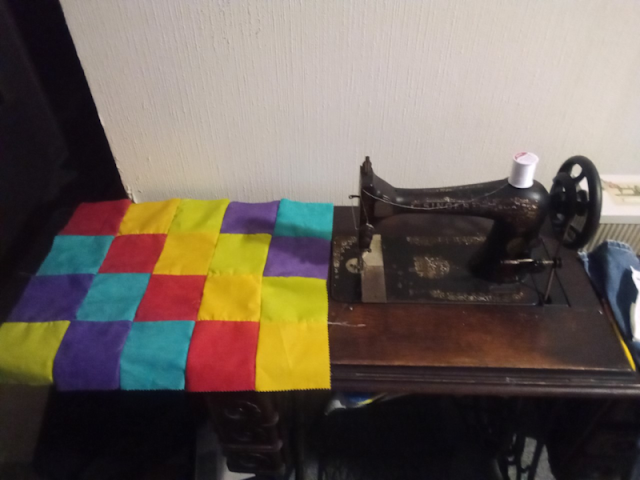 First thing: I need to work with it in short bursts.  It's...well, I jokingly referred to it as great-grandma's elliptical machine.

It wasn't that much of a joke.  Using the hand wheel to get it started and then getting the treadle going properly?  Yeah, about an hour of that made my forearm, hand, and thighs cramp, and made my legs ache pretty fiercely for a couple of days.  And I managed to not quite kick myself into a CFS/ME attack.*

Second: I need to practice with it without threading it.  It's a lovely machine, but has some serious limitations--it only does one stitch, one length, only in one direction, with no reverse.  And if I don't keep the treadle going right (with the hand wheel turning toward me), the thread snaps, and the bobbin thread snarls up and needs picked loose.

Third: It's actually pretty easy to use.  I just need practice.

Fourth: Singer knew their straight stitch machines were limited, and actually came up with work-arounds for house-wives who didn't want to replace their sewing machine (and yes, there would have been a lot--I don't think I will ever give this machine up, not even if/when I get enough better at sewing that I am actually adjusting the fit of my own clothes).  At some point, when a Japanese brand came out with a model that had a zigzag stitch, Singer engineered their own...and made an attachment for their straight-stitch machines that would do the zigzag stitch.  No, the needle doesn't move back and forth like it does on a modern machine--the attachment moves the fabric back and forth.  I've seen videos of it being used, and it's cool as hell.

Singer also made button-hole attachments that worked the same way for their straight stitch machines.

Yes, the attachments are out there, and yes, I can find them for purchase.  And I will likely go for them, eventually.

Fifth: I am not set up to sew.  There are a lot of tools I really need, first.  I've lost track of all of my scissors, and my daughter's claimed the one set I had put aside for fabric for her birthday model.**  And I need to read the chapters in my Good Housekeeping ginormous book of needlework that includes everything from sewing (clothes, quilts, and household "soft furnishings) to crochet to tatting to knitting (which was why I initially snitched it from my mom when she said she never looked at it anymore).

I am making a list of the tools I need, and of the tools I'd like to have.  Yes, there's a difference--that's why there are two lists.  (I need an iron.  I'd like a sleeve-board, but I have a travel ironing board that will work well enough.  I need a set of pinking shears, a good pair of scissors for paper, and a better set of fabric shears than the ones my daughter took off with.  I'd like a rotary cutter and mat, but I don't need those, since I'm still barely learning.)

Sixth: I think this is something I need to do.  Using my great-grandmother's treadle machine gets all of the different threads in my brain untangled and working together, rather than at cross-purposes, much like target-shooting with a bolt-action rifle (which I called loud meditation) used to do.  I can't really do the loud meditation as often as I really need to anymore--I don't have the energy budget to be able to with all of the other demands on it.  But I might be able to take up sewing with the treadle machine in short, daily bursts, and have the same, beneficial effects.

Seventh (and last): It's gonna be funny as hell when my doctor asks (as they always do) what kind of exercise I'm getting, and I tell her that I've started sewing.  And only tell her what I'm using after she's started looking confused.

*I managed to avoid it, but my kitchen suffered.

**The pixie is now eleven years old, and was really irritated that all of the models she had ever seen were for boys, and was utterly delighted when I got her a doll house model.  But she needed my fabric scissors for some of the steps.

Posted by Heroditus Huxley at 8:37 AM