Are they TRYING to start the dance early?

I've been seeing stories: Hobby Lobby forced closed in some areas, others decreeing that the sale of "non-essentials" are banned.

First, hobby stores in general: most people "self-isolating" like good little proles don't have a whole lot of keep-busy supplies on hand.  Not a lot of games, models, or what have you.  I do, but I am, as I have come to find out, quite the odd duck.*

Given that lack...what are people supposed to do?  There's only so much TV any individual can tolerate...and, as I have also come to find out, most people don't read.**

So yeah.  People head out for a quick trip to the hobby store for whatever they enjoy doing, whether that's building models, painting minis, painting, calligraphy, sewing, quilting, knitting, crochet--whatever.  Something.  To.  DO.

Same with home improvement stores.  My other half has built two bookcases, and a kitchen cart*** for me since this bullshit started.  But people are whining that those need to close, too.  Because "mah health, damn it!"****

Really.  Cool.  You don't want to load boxes for people obeying the illegal orders to stay home, then stay home and somebody else with more sense can have your job.  Because, yes, damn it--they are a necessity to continue this charade, this bit of security/safety theater--because there are women out there that would like to get laid even if you've never met one, and the choice is between a battery operated bit of plastic or going out. 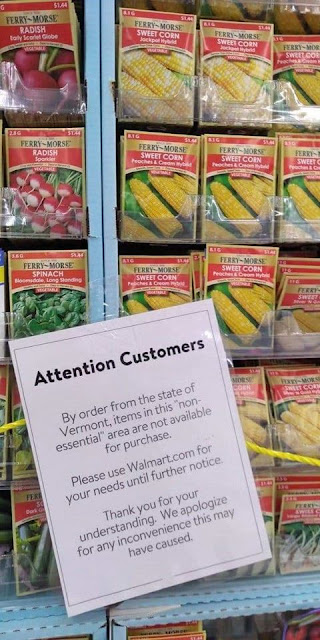 That.  That right there.  That picture.  Notice what's blocked off?  That's right: future food.  Yes, people are being forbidden from buying the materials to grow their own damn food for later.  That's "nonessential."

Other places are banning the sale of books.  And toys.  For kids.

Dude.  Those politicians are going to get tarred, feathered, and then lynched--if they're lucky--by the parents of the children booted out of school by the same, panicking politicians.  If they're not lucky, they're going to be rounded up and shoved into a SMALL ROOM with ALL the children they've sentenced to murderous boredom.

I really think that these things, more than any other, are going to be what sets Americans off.

Because as a generalization, generations younger than mine sort of lack anything resembling delayed gratification.

*I'm not bored.  I have a ton of yarn, all sizes of knitting needles, more books than I have shelf space for (though that is changing), fountain pens, pretty ink, paper, and all sorts of ideas for knitting projects, and stories to write.

**I have a friend who'd love to read for fun, but never has been able to get into that habit.  Another friend has learned that she needs audiobooks because her eyes don't want to work together to read for as long as she wants to.  Most of my other half's coworkers for the past two decades don't read at all for entertainment.

***Kitchen cart: basically a bookcase frame on wheels with a drawer pull, with slats on both sides to keep potatoes and onions from falling off the shelves.  Fits perfectly in the 8" dead space between the end of my cabinets and my fridge, and doesn't block the dishwasher from opening all the way.

****Yes, I've heard calls by employees for stores to close.  I don't think these twits realize how replaceable they are--they're basically no-skills workers that slide a bar-code across a scanner.  They are perfectly welcome to stay home, and let braver, smarter, healthier people who've been laid off take those jobs.

*****Seriously, who's determining what's "essential" and what's "non-essential"?  Inquiring minds want to know, so that we know specifically who needs a new coat of tar and feathers.
Posted by Heroditus Huxley at 8:10 PM