The horde has hit the city of brotherly love.

I've read so many stories about "flash mob" violence, lately. One thing I've noticed is that said mobs tend to gather in areas with huge levels of government entitlement programs, and tend to hit areas where the victims are made helpless by the government disarming them.

It won't be too terribly long before the rest of us have to deal with it on some level. Thank God for "shall issue" states and municipalities. 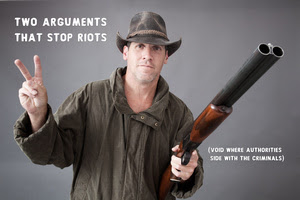 Thank you, Oleg Volk, for putting in pictures what would take many thousands of words to say.
Posted by Heroditus Huxley at 1:07 PM