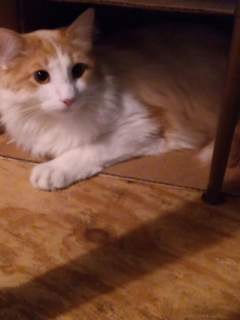 *Weber Spirit propane grill.  The casters are...yeah.  Scrunched, if not outright broken, like the front left one (as you're facing the grill).  Considering a PATIO ROOF made of TWO BY SIXES (if not two by eights) LANDED ON IT...I suppose it stood up well.  All things considered.  Might actually be willing to use it, if the poor thing hadn't got slammed down on its front and dumped the burners and everything when the roof got taken off of it to be taken apart.

**Gus--named after the fat little mouse from Cinderella--was one of two kittens my sister took from a lady that didn't know how to raise days-old kittens after their momma tangled with something fatal.  Gus was the only one who survived being fed puppy formula for a couple days.

Posted by Heroditus Huxley at 5:51 PM